Born in 2005, Made in Steel has constantly grown through the years and the editions, in terms of both exhibitors and attendance. As a result, in 2013 the tradeshow moved from its original venue in Brescia to Milan (fieramilanocity) and then in 2015 to Milan’s Rho site (fieramilano) in concomitance with its drive to go international. The 2019 edition, according to the figures validated by ISF – Institute for Certification of Trade Fair Statistical Data, was the best edition ever of Made in Steel, creating the participation of the largest number of exhibitors and visitors in the history of the event. The Conference & Exhibition at fieramilano Rho, with over 12,000 square meters of exhibition space (+10% compared to the 2017 edition) and over 300 exhibitors (+56% of the foreign company compared to the previous edition), registered over 16,500 visitors, up 12.3% compared to the 2017 edition. Foreign attendance reached 26% of the total. According to the Customer Insight of Made in Steel 2019 drawn up by the third-party Grs Explori, overall satisfaction with participation in the event was positive for 83.2% of visitors and 91.1% of exhibitors.

KEY PLAYERS working with US at the previous tradeshow editions Many of the Italian steel industries historic figures have attended the last seven editions of Made in Steel, participating actively in the ongoing debate. They include, to mention just a few: Luigi Lucchini; Steno Marcegaglia; Nicola Amenduni (President, Valbruna Group); Giovanni Arvedi (President, Gruppo Arvedi); Gianpietro Benedetti (President, Gruppo Danieli); Alberto Bregante (CEO SMS INNSE); Antonio Gozzi (Duferco); Jens Lauber (President, Eurometal); Giuseppe Manni (President, Manni Group); Antonio Marcegaglia (President, Marcegaglia Group); Giuseppe Pasini (President, Feralpi Group); Emilio Riva; Alessandro Trivillin (CEO Acciaierie Bertoli Safau).    Made in Steel has also welcomed many international guests from the steel industry, public institutions and the academic and research world. This is because we make a point of focusing on innovation and knowledge sharing, which is just the sort of cross-fertilisation that triggers new ideas and pushes back horizons. That’s why over the years we’ve involved people like Marco Fortis, Riccardo Monti, Simone Moro, Dipak Pant, Jeremy Rifkin, Marina Salamon, Giacomo Vaciago, Marco Vitale.
Made in Steel Awards
During every edition of the event, an expert jury gives the Made in Steel Awards. Prizes are assigned to exhibitors and stand designers for the forcefulness and flair of their message, and for the most effective, ground breaking presentations of their products and services.
There are three award categories: Best Communication Stand, for the most effective advertising effort; Most Friendly Stand, for the most welcoming stand; and Best International Stand, for the stand with the most international flavour.

The last editions saw the following awards and award winners: 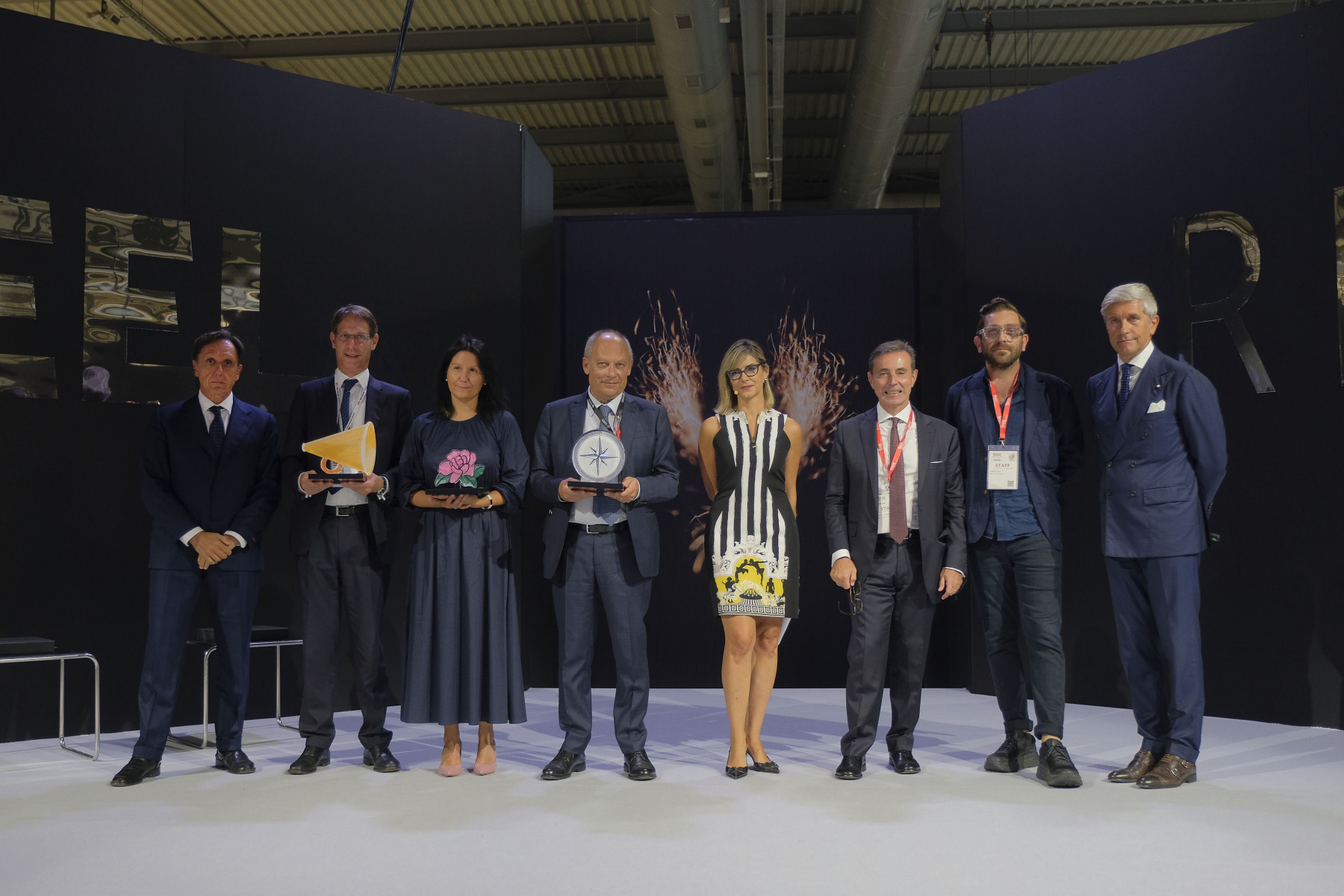 In the picture, from left: the representative of Aperam; Maria Cristina Carlini, the artis who created the awards (three works of art from her 2014 series called “Alberi” (which means “Trees”), made in iron, stoneware and gold dust), Emanuele Morandi Made in Steel CEO, the representatives of ArcelorMittal Italia and Liberty Steel.